Want the scoop on Aries man traits? We’ve got it!

Most people know Aries as the sign of the ram (ruled by Mars), and the zodiac sign for March 21 – April 19. You may also know this fire sign has some intense, “sound the alarm” traits.

Because Aries is associated with strength and power, these guys often get a bad rap and are seen as alpha males and risk takers.

But let’s debunk that myth right here, right now because this romantic, fun-loving guy has a lot to offer, from loyalty to leadership qualities.

So, if you’re dating an Aries guy, here’s a list of his most swoon-worthy traits! 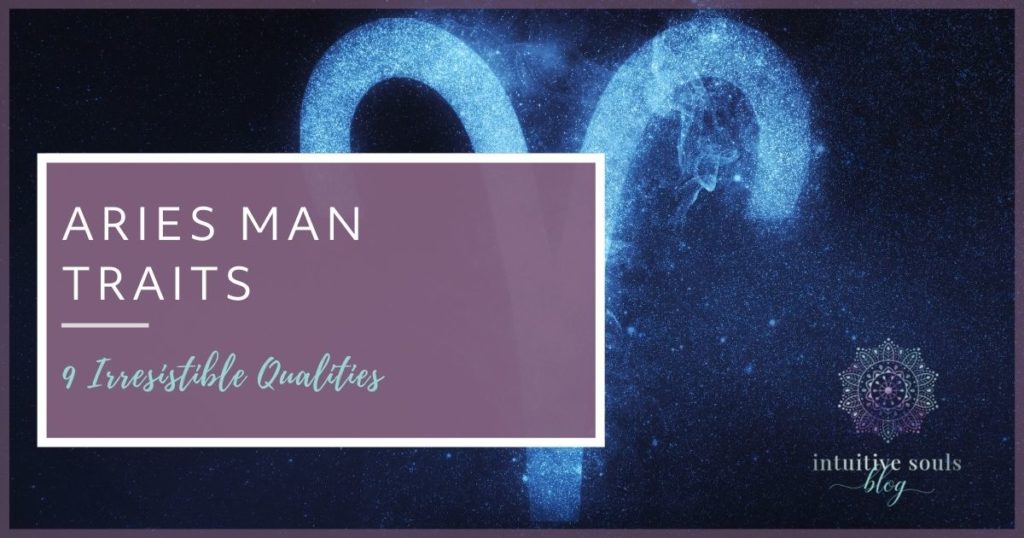 Aries men know what they want, and, being the natural leader that he is, will almost always make the first move.

Since he loves the thrill of the chase, you don’t have to worry about sending a double text or asking if he wants to make it official!

When he falls in love, you’ll know…

He won’t beat around the bush; you can count on him giving you a yay or nay rather than sending you passive-aggressive signals.

If he’s not making the first moves, ask him about it. He’ll most likely give you a straight answer.

Tip: Aries is most compatible with Gemini, Leo and Sagittarius.

A man who is a romantic and makes the first move? Yes, he’s one of the most romantic sun signs in astrology!

You see, an Aries man in love values his relationship. And that’s something their significant others love.

He wants compatibility and to build a strong foundation with his soulmate, and is much more driven by this than lust (though he is a great sexual partner).

We won’t go as far as to say he’s a hopeless romantic, but he’s definitely got romanticism in his blood!

Aries men have leadership in their DNA. They’re also strong, assertive, and decisive.

Because of this, they make for great leaders in all areas of their lives… That includes relationships, which could be a plus or a minus for you.

If he gets to be too overbearing, make sure to have a conversation with him. Open communication will be important in a this relationship. So, don’t hesitate to open those doors of communication when needed.

Being competitive is one of his best-known personality traits. In fact, you’ll find many Aries men in martial arts!

They can’t help it — it’s how they are wired. (This sign is known as the God of War, after all!)

He wants to do, and be, his best. And if he feels like he’s falling behind, he’ll do everything he can to get back on top.

If you’re dating an Aries man, this can be tough. You may feel like your guy is prioritizing other things over you to succeed. In this case, a gentle reminder will do the trick.

And if he feels like your relationship isn’t up to par, his competitive instincts will get it back on track.

If you’re in love with this astrology sign, you’re probably not into mysteries and intrigue.

That’s because it’s Aries personality tell it how it is, and their actions mirror their values, always. Don’t try to play games with him, because he won’t understand or play them back.

As you can guess, this sign of the zodiac is pretty predictable.

He’s not predictable in the sense that he’s boring, but he’s a consistent guy with a steady life.

Aries males are not driven by their emotions, but can deal with people who are. So, while he may not be the best for someone who is ultra-sensitive, he can handle emotion. In fact, his consistency and emotional detachment can be beneficial as a partner.

When the Aries man is in, he’s ALL in. He doesn’t do anything without maximum effort — including your relationship. Good news for you, right?!

On the flip side, his intensity can be a lot at times. So be sure you are ready for it… or ready to let him know if things are getting too intense for you.

You’ll notice that most Aries men are hard workers who become successful in their careers.

But the interesting thing is, most of them are not motivated by money.

Instead, most Aries males are passionate about their work, and would rather work towards goals. And, because of their nature, they also work hard to outdo the competition.

The Aries man strikes a balance between being serious, driven, and fun-loving.

Men with this zodiac sign need fun and adventure in their lives, but they’re never over-the-top about it.

These aren’t the kinds of men that need to go on a hike or a bike ride every weekend. But if you present him with a fun adventure, he’ll be up for it!

And while they’re serious with work and responsibility, they’re also able to let loose.

Aries men don’t sound so bad after all, do they? They’re fantastic, and contribute leadership, diligence, and loyalty to the world… and of course, to you.

If you are dating this fire sign, count yourself lucky because he’s a romantic who cares a lot. Heck, he’ll probably do some reading up on your astrology sign to understand how lucky he is to have you!

33 shares
We use cookies on our website to give you the most relevant experience by remembering your preferences and repeat visits, and to analyze our traffic. By clicking “Accept”, you consent to the use of all cookies.
Do not sell my personal information.
Cookie Settings Accept Reject All