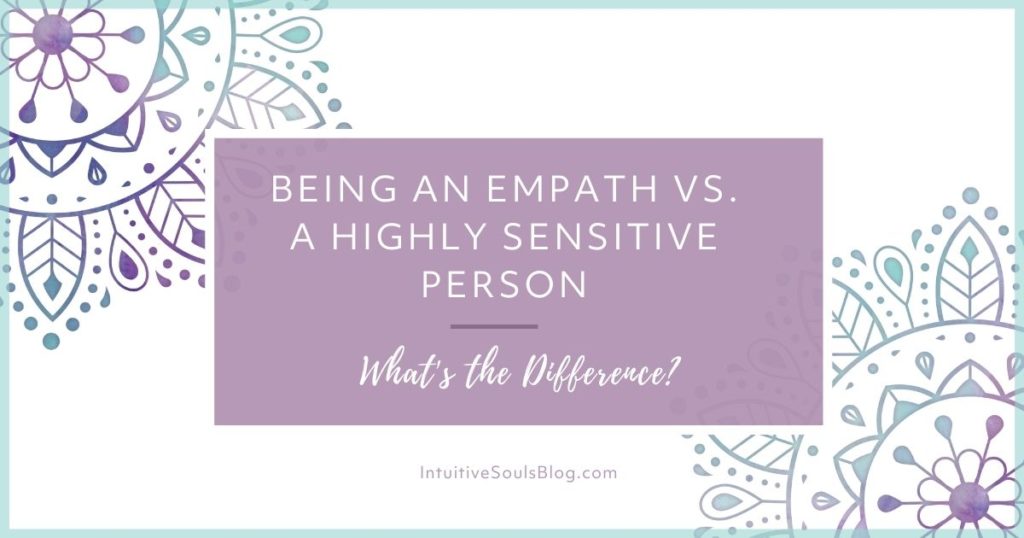 Empathic Abilities vs. Being a Highly Sensitive Person

Having empathic abilities (a.k.a. being an empath or clairsentient) is different from being a highly sensitive person (HSP).

I know that many people use the words empath, empathic, and highly sensitive person interchangeably. But it’s important to know the difference so that you can learn to work with the gifts you have, and not be overwhelmed by them.

Let’s jump right in and compare the differences, starting with empathy.

One of the things that makes us human is the ability to feel empathy for other human beings.

We’ve all felt empathy and experienced something like this:

Your best friend’s dad dies, and your heart goes out to her. You check on her and cook her family dinner, complete with salad and your signature coconut-fudge cake. When you deliver the goodies, you make her a cup of hot tea, and sit with her as she cries. On the day of the funeral, you support her. After the funeral, you feel tired, but are able to return to work when the service ends.

Empathy is something we can all relate to. Now, let’s look at the traits of psychic empaths vs. highly sensitive people.

You go out to dinner with a friend. It’s fun until a party of eight walks in and sits at the table next to you. You think, “Oh no, they are getting loud.”  You feel like you might crawl out of your skin and wish you had come to dinner at 4pm to enjoy an early bird special in quiet.

Someone who is empathetic, or as it’s often called now, a HSP, automatically tunes in to their surroundings.

They pick up on sensory stimuli in their environment without trying to or even being aware they’re doing it, which can cause sensory overload.

Here are some common traits that highly sensitive people share.

A friend adopts a cat. You go to her house to meet the little guy and feel a wave of intense emotion. You can feel what this poor kitty went through in his prior home and start to cry. He’s scared and doesn’t understand what’s going on or that he’s safe now, and you feel this energy emanating from him.

An empath (or clairsentient) can experience the emotions, feelings, and pain of others. They take on the emotions as if they were experiencing them.

Now, let’s explore empath traits. Again, empaths are those who can feel the emotions of others, and typically have the psychic gift of clairsentience. Empaths:

What it boils down to is that people who are empathetic or HSP are not necessarily empaths, but an empath is an HSP on steroids; there are many more HSP’s than empaths.

Our fast-paced world of constant bombardment of stimuli can make it really tough for empaths to enjoy a fulfilled and peaceful life. As an empath myself, I totally get that!