Chinese numerology. The ancient Chinese believed that numbers were important… so important that the whole universe is based upon them.

Today, we’re going to talk about how to decode your birthday numbers according to Chinese numerology.

Chinese numerology is based on a grid system (we’ll talk more about that in a minute).

The fascinating thing about the grid is that the center lines add up to 15, diagonally, horizontally, and vertically!

What’s so important about the number 15?  Well, 15 is the number of days it takes for a new moon to become a full moon.

And we all know the moon is a powerful energetic force! 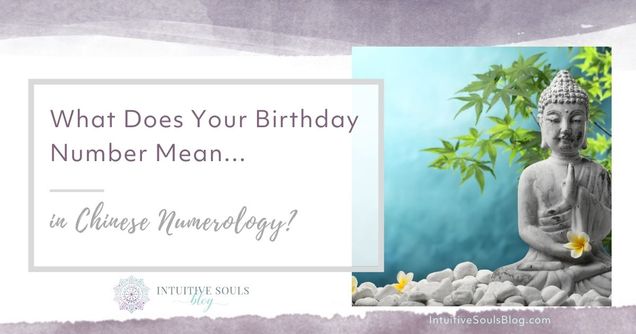 Chinese numerology has been around for at least 4,000 years. It is based on the Lo Sho grid, which was inspired by a turtle shell. (In 4,000 years, they’ve probably perfected the system!)

Legend says that Emperor Yu was on the banks of the Lo River one day when he noticed the “grid-like” pattern on a turtle.

This “Legend of the Turtle” inspired Chinese numerology and Feng Shui.

How to do Chinese numerology

The chart used for Chinese numerology is a bit different from the typical numerology chart.

Only the numbers 1-9 are used in Chinese numerology. You won’t be using the number zero, but don’t worry — if your birthday contains a zero, ignore it. For example, 30 becomes 3.

Filling in the chart

Let’s look at where the numbers go, and then we’ll fill in the chart with your birth date.

It’s very easy. Take a look at this example:

Now let’s get to the fun part: interpreting the numbers.

Here’s how they break down:

Middle Horizontal Row: 2, 5, 8. Emotions and Feelings. This row has to do with how you feel, your emotional state, spirituality and  intuition.

Top Horizontal Row: 3, 6, 9. Thinking and Logic. This row represents your mind, including your imagination, and analytical abilities.

Here’s an easy way to remember what each horizontal row means… think of your body:

The vertical rows can help you figure out what steps to take to accomplish your goals and dreams.

Middle Vertical Row: 4, 5, 6. Determination. This column shows how persistent you are, how determined to accomplish your goals, and whether you’re stubborn.

Right Vertical Row: 7, 8, 9. Action. This is an important row. It represents your ability to take your thoughts and creative ideas, and put them into action.

The numbers 1-9 have different meanings in Chinese (Eastern) numerology than in Western numerology.

Below you’ll find both interpretations. But which one should you use?

There’s no right or wrong, just have fun with it!

How to interpret your Chinese numerology chart:

Eastern interpretation. Ones are independent, ethical, and are overcomers. They may feel lonely and retreat from the world at times. Did you ever watch the TV show A Football Life? My husband does, and the players often tell stories of how they overcame adversity and became professional athletes. That’s an example of a number 1. So much awesomeness!

Western interpretation. One is powerful, which makes sense because it’s the number that all other numbers derive from. People with number 1 energy make awesome leaders and know how to get stuff done.

Negative traits. 1’s need to relax because they can get easily annoyed or become aggressive.

Western interpretation. 2’s are unstoppable. When they set their minds to something  they do it. 2’s are also very powerful, but quiet. Though 2’s can be men or women, they epitomize the expression “behind every successful man is a good woman…” In other words, 2’s work their magic behind the scenes and don’t care about being in the spotlight. As gentle, diplomatic souls, they are Masters of gentle persuasion. 2’s are also artistic and make excellent caregivers.

Negative traits. Can have low self-esteem, and a flair for the dramatic. 2’s can also be jealous, especially in relationships.

Eastern interpretation. Three is a great number and represents growth and abundance.

Western interpretation. 3’s are awesome, happy, bright, sunny people. They bring a little sunshine wherever they go. They are also very friendly, social, and optimistic.

Negative traits. 3’s need to learn to focus, otherwise they can get a bit scattered. Because they are so social and well-liked by others, this can lead them to be egotistical if they allow it.

Eastern interpretation. They say that a 4-leaf clover brings luck, but in Chinese numerology, 4 can mean a tough life and lots of struggles.

Western interpretation. My husband is a classic 4. Hard working, dependable, happy living a simple, comfortable life. 4’s are the “salt of the earth” people.

Negative traits. Can be set in their ways, easily frustrated, or closed-minded.

Eastern interpretation. 5 can be a positive or negative number in Chinese numerology. On the positive side, it is said to mean balance. That’s great, everyone wants a balanced life, right? On the negative, it is said to represent the word “no” unless it’s paired with another unlucky number…  sort of like they cancel each other out.

Western interpretation. Ever meet a person that’s a whirlwind? Super outgoing and social, and always up for an adventure? A high-energy person that doesn’t ever need to drink a Red Bull?  Yeah, that’s a 5.

Negative traits. We love ya 5’s, but you can lack focus and be a bit all over the place. Sometimes, you aren’t reliable and are late to parties. Should be cautious that they don’t fall into addiction.

Western interpretation. Kind, caring, and compassionate human beings. Are excellent caregivers and are peaceful people who want to leave this world a better place. Often domestic and happy spending time at home.

Negative traits. Can get too caught up with the emotion of guilt — which does not make the 6 joyful. Can sometimes be seen as not having a solid foundation in life.

Eastern interpretation. The number 7 is a people person. They have great people skills and relationships with friends and family.

Western interpretation. 7’s are spiritual people and deep thinkers. They ponder things like the meaning of life, and have a unique way of looking at things. Also, they are super charming and interesting to have a conversation with.

Negative traits. 7’s have to be careful not to get so wrapped up in their head that they withdraw from the world. After all, we’re here to interact with others.

Negative traits. Can be too money-hungry and not willing to share it.

Eastern interpretation. 9 is a great number to have in Chinese numerology. For example, a wedding date with a 9 in it could mean a long-lasting, happy marriage.

Western interpretation. 9’s seem to have “a little of everything.” They have a little of each of the wonderful traits of the other numbers. They are creative, charming, caring, and patient.

Negative traits. Sometimes 9’s can come off as a “smarty pants” or snobbish to other people.

51 shares
Scroll to Top
We use cookies on our website to give you the most relevant experience by remembering your preferences and repeat visits, and to analyze our traffic. By clicking “Accept”, you consent to the use of all cookies.
Do not sell my personal information.
Cookie Settings Accept Reject All