Biblical numerology. Numbers and symbolism are all around us.

We can find them on signs, in names, and in the books that we read; and especially in religious texts like the Bible.

Numbers are super important in biblical or Christian numerology… especially the numbers 3, 7, and 40.

To learn about another number, choose the day of the month you were born: 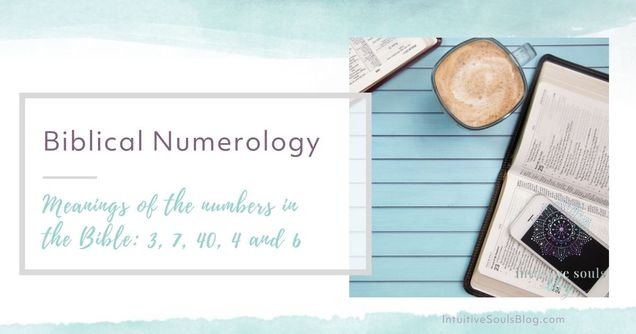 In biblical numerology, the number 3 is the most spiritual of all the numbers.

That’s because it refers to the perfection of the Holy Trinity — the Father, the Son, and the Holy Spirit.

The number 7 is also quite awesome.

It represents oodles of good stuff in the Bible, such as perfection and completion.

Since God is the only one that is perfect and complete, this is said to be His number.

The number 40 shows up a lot in the Bible.

Some say 40 is an unhappy number in biblical numerology because it’s often associated with struggle or painful situations.

Other Numbers in Biblical Numerology

3, 7, and 40 aren’t the only numbers that shine in the Bible. Other numbers make several appearances, too!

The number 4 is powerful, as it represents creation — like that of the four seasons (and I don’t mean the hotel, though I’ve heard it’s very luxurious!)

Can you imagine if there were 5 seasons? Or six? I imagine they would be like summer, winter, super winter, spring, and fall!

I think they got it right with 4!

There was an urban legend that the college I attended was designed by some freaky devil-worshiping architect because everything in the school was designed in 6’s… 6 stairs here, 6 windows there…

First off, that could totally freak you out if you get a new license plate with three 6’s in it, or live in a place that has three 6’s in the zip code!

So, don’t worry about it because:

Plus, the number 7 appears more times than three 6’s in the Bible, so don’t worry.

Christian numerology isn’t the only system of Biblical numerology.

In Hebrew numerology, each letter is represented by a numerical value. Gematria takes those values to understand the relationship among words, concepts and ideas.

Um, what?  (Stick with me because this is fascinating.)

Okay, so think of a spider web and the way it all intertwines. The whole thing is connected.

Now, because God’s speech created the universe (On the first day God said, “Let there be light…”) it is said that the numerical value of two words can reveal the connection between the potential of those words.

It uncovers a deeper, connected relationship between the words.

Thus, Gematria tries to find the connection between everything.

For you overachievers who want to know more, there are four different ways the value of letters can be calculated.

They relate to the four letters of God’s essential name in Hebrew, Havayah, and to the four spiritual realms:

Biblical numerology is a fascinating subset of numerology that often gets overlooked. But it has much to reveal to us about the world we live in and how we fit into that world!

148 shares
We use cookies on our website to give you the most relevant experience by remembering your preferences and repeat visits, and to analyze our traffic. By clicking “Accept”, you consent to the use of all cookies.
Do not sell my personal information.
Cookie Settings Accept Reject All